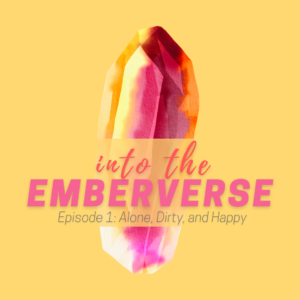 Welcome to the first episode of Into the Emberverse!

Welcome to Tesolace, and the Emberverse.

Hello out there! Lucy Fenwick here, and I am happy to welcome you back Into the Emberverse. I hope you’ve been well since our last chat. If you’re new here, feel free to snoop around a bit. Now, please, make yourself cozy, and I will fill you in on all that has recently transpired.

New episodes release every other Wednesday, so make sure to follow the show and you’ll never miss one.

Into the Emberverse is written and read by Steffani Dawn.

Buy Lucy a coffee through Ko-Fi. Your support helps Lucy pay for her room at Madame Dufree’s and also keeps her adventures advertisement free.

As a sincere thank you for your support, you also get access to 30 days of bonus content (released on the Wednesday’s between new shows) with each coffee.

I have never been so alone, so dirty, or so happy!

As soon as my sister Madeline’s primary education concluded, just a handful of days ago , I made my way here. To Tesolace. The original refuge of the Tinkerers, and home port to Sky Lab Academy.

And so I find myself on this backworld planet. Constantly covered in grime. Surrounded by machines I don’t understand. With nothing to do for months.

And I love it!

But here I am, getting ahead of myself.

I suppose I should introduce myself, because if this broadcast really is making it all the way to Earth, then you have no idea who I am. Not that many people in the Emberverse know who I am, either, but I digress.

You might be wondering what an ambassador’s daughter is doing broadcasting her thoughts out into the Emberverse and beyond. And really, I’m not sure. But seeing as how I am without an easy comms connection to my sister, Madeline, I need someone to talk to. And you – whoever you are – are who I’m going to talk to.

See, I found this broadcasting equipment – free of charge, I might add because of how old it is – in the junk shop below the room I am renting, here on Tesolace, and a note scribbled inside it told me that this comms channel reaches Earth. For all I know, you Earthlings still know nothing of the Emberverse and so you’ll hear this and think it’s fiction.

Oh well. Even talking into the void is better than talking only to myself.

If you do know of the Emberverse, then you may be confused by the fact that an ambassador’s daughter is alone on Tesolace. It has taken me five cycles, but I am happy to say that I have finally convinced my father to let me attend Sky Lab!

I am so excited.

I have only ever been allowed to accompany my father’s entourage on one trip per cycle. It’s better than no trips, I supposed. But I want nothing more than to see the vastness of the Emberverse for myself.

That’s one reason I have been so interested in attending Sky Lab. I have a strong urge to explore, but no desire what-so-ever to become an Emberstone Guardian. Ugh. The Royal Air Service doesn’t value knowledge nearly enough. And the fighting – it just isn’t me.

On the other hand, the Blood Rogues are too feared by much of the galaxy to be widely accepted. And what is the point of traveling if, every place you go, people are afraid of you?

We’ll ignore that neither organization would take me, anyway, for the fact that I am a Tinkerer.

Though without the abilities so many of my people are born with. Much to the annoyance of my father.

But Sky Lab doesn’t care. They accepted me on bloodline only. And I have never been more grateful to have been born a Tinkerer.

As it stands, Sky Lab is my best option for traveling as far and wide as I would like.

In case you don’t know, which, even here in the Emberverse, some don’t, Sky Lab is a Tinkerer-based-multi-species secondary school. It offers many pathways of study, most of which are in the different sciences.

Which pathway I will choose remains to be seen.

I admit that starting here at the age of 20 is a little aggravating, as the rest of those in my class will be fresh out of primary at the age of 17, but my father was adamant that an ambassador’s daughter was too good to attend a secondary such as Sky Lab.

Regardless – I am here now, and I cannot wait for classes to start. However, it will be a quarter cycle before that happens. Until then I will explore as much of Tesolace as I can, especially the port city of Kestelton.

I have only been in Kestelton three days, but I am completely in love with it already.

My father always wanted us to keep our distance from Tesolace – the home world of the Tinkerers. So I’ve never been here before.

It is everything I hoped it would be. Tesolace is considered a backworld – in that the modern technology that they choose to use here is very selective. Personally, I find Kestelton quaint and charming. Emberstone energy still powers everything – including the airships – though their design is much less sleek than what many worlds use. The copper clad dirigibles that float from dock to dock gleam in the light of Tesolace’s beautiful yellow sun.

Each one is either painted, or embellished with gems and precious stones representing whoever owns the ship. The public transports are the most beautiful of the bunch with intricate paintings that often cover the entire ship.

The stone buildings use black iron hardware that is usually crafted into animalistic, and sometimes mysterious, shapes to add a distinct Tinkerer flair. In order to accommodate the airships, towers adorn at least one building in each block, gracefully stretching high into the sky. Atop each one is a dock.

The cobblestone streets below are awash in dark and quiet little shops. Each shop tends to be focused on one, very specific, thing. Many are purveyors of parts and pieces needed for the advanced cybernetics and body modifications that the Tinkerers are known for.

The shop next to the junk shop below me only sells gears and cogs. That is it. Nothing else. If you’re starting from scratch – as I am – it is a lengthy process to procure all the things one just might need in a working. But that is a discussion for another time.

Other shops are focused on knowledge. AND! And, and, and! They still use books here. Real books. I have only seen real, physical, books on one other planet in my entire life.

I haven’t been able to purchase any yet, as I have a limited amount of funds available to me until I can secure some type of employment. But I have enjoyed perusing the shelves of several stores, making note of titles I think will come in handy to someone just learning the art of Tinkering.

Being the home world of the Tinkerers, it is to be expected that there are machines everywhere. And there are. They vary in their autonomy and their intelligence as much as in their appearance, but they are such a sight to see for one such as myself.

I had a very lovely conversation with Madame Dufree’s cleaning unit yesterday.

While there are bots used everywhere in the Emberverse, the rest of the species struggle with the concept of sentient robotics. An aversion I have never understood. But I am getting off topic.

The amount of machines roaming around Kestelton leads to a type of filth I have never experienced anywhere else. I believe it adds to the “backworld” view others have of Tesolace. I also think it is done on purpose, because, truthfully, there is no need for it.

The mechanical dust leaves a filmy layer of charcoal-like grime that sticks to everything and builds up in cracks and crevices. The streets are – disgusting. To say the least, really. This is what makes me think they do it on purpose.

Of course, the majority of people travel mostly by dirigible, but in order to visit the ground level shops, one must traverse the streets on foot.  Why not have cleaners? Even the dust they would contribute would be less than they would be able to pick up.

There is something about catching a glimpse of myself in a mirror or window and seeing a soot-like smudge on my cheek or the darkened ends of my hair that makes me smile. Probably because my father would have a fit if he saw it.

An ambassador’s daughter is to be completely presentable at all times – no exceptions.

If I weren’t concerned that he would send someone to collect me immediately, I would send him a picture of myself after digging around in the junk shop downstairs. [Ha!] He would not be amused.

The only thing missing from this wonderful place is people. The Tinkerers are a reclusive bunch from my limited experience, and having lived as part of an ambassador’s home – I am not a recluse. I miss Madeline and my brothers terribly. I miss the entire household. The few shop owners I have encountered so far have been more content to continue to, well, tinker, while I’ve been in their presence than to strike up a conversation.

And while Madame Dufree is nice enough, she’s not chatty.

So I find myself talking into the vacuum of space, hoping it will help me feel less alone until I find some other people my age on this, so far, lovely planet.

I have to say, I believe it is working. I feel much better now than I did when I sat down. So I thank you, dear listener – wherever you are. I shall keep you up to date on my attempts to locate other young people before classes start. A quarter cycle seems an awful long time to go without anyone to gossip with.

Until we chat again, look up at the stars, take a deep breath, and remember that I – for one – am thankful you are out there.

Thanks so much for listening, I’m Steffani Dawn, the author and voice of Into the Emberverse.

If you enjoyed today’s installment, please consider buying Lucy a cup of coffee through Ko-Fi, link in the show notes below or at intotheemberverse.com.

Every cup helps Lucy pay for her room at Madame Dufree’s and also keeps her adventures ad free.

New episodes of Into the Emberverse release every other Wednesday, so make sure to hit that follow button so they’ll be saved for you.

If you’re intrigued by what you heard today, please share this episode on social media. Every share is like a little hug and is appreciated more than you realize.

For more of Lucy – and other Emberverse stories – you can find all our socials in the show notes below.

Until we chat again, take care of one another.